Elaine tagged me for the meme about my man. I thought this one would be fun to play along.

What is his name? Mr. Serious

Who eats more? Typically him, but now that’s he’s dieting and I’m preggo, it might be a toss up.

Who is taller? He is by 10 inches. Wow, never thought of that!

Who drives most when you are togetherz? Typically him unless it’s right after fighting traffic after work.

Who’s more sensitive? This is a toughie. Sometimes me, sometimes him. He’s a big teddy bear.

Who does the laundry? Me. He’s intimidated by having to sort and make decisions about temperatures.

Who pays the bills? Typically, I pay them, but I do most of them online.

Who cooks more? I do.

Who is more stubborn? Anybody that knows me know that this is ALL me.

Who is the first to admit they are wrong? We both are pretty good about it.

Who has more siblings? We each have one, but then I have a half-sister, a half-brother and a step-brother in addition…so I guess I do.

Who wears the pants? Most people would probably say me, but behind the scenes, it’s all him.

What do you like to do together? Go out to eat, go for a walk, go on vacation…it doesn’t take much.

Who eats more sweets? Me. Can you hear my teeth rotting?

Guilty Pleasures? Does this mean his? I guess his would center around food or treats.

How did you meet? In high school. We knew each other, and then saw the light. Turns out we went to different elementary schools, but we went on the same field trip with a small group of kids in 5th grade…so we might have met then, too.

Who asked whom out first? I asked him out first. It was more of a bargain. I told him I’d go to his basketball game if he went to church youth group with me…we’ve been inseparable ever since.

Who kissed first? That was me, too. I totally surprised him.

Who proposed? He did, in my college apartment. Then, the next day he went out of town for the weekend for a conference…that made me sad.

His best features & qualities? He loves me unconditionally, he’s a hottie, he’s a great dad, I could go on and on and on.

Us at a wedding in May: 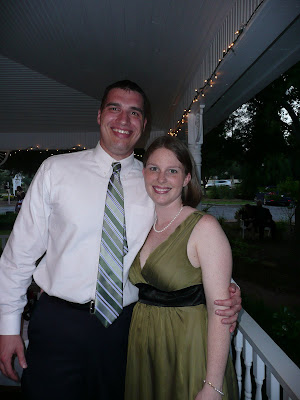 I will tag people if they want to play along:
Stephanie
Dana
Chelle
Tara