While listening to the radio the other day, I heard an older sister call in.

Her younger sister had previously called in upset.  You see, their mother had given the older sister her (the mother’s) wedding dress when she was engaged to be married.  The engagement was broken off, and sadly the mother passed away.

The younger sister is now engaged and wants to wear their mother’s dress.  She called into the radio station to see if anybody else had any ideas how to talk to her sister.  The older sister was absolutely adamant on not allowing her younger sister to have the dress for her wedding.  There was no changing her mind.

So, I was listening to the older sister’s retaliatory call.  She was calling to defend her decision not to let her younger sister wear their mother’s dress.  She said it’s what her mother would have wanted.

Again…the older sister said she was putting herself in their mother’s shoes and their mother would be completely against her younger daughter wearing her wedding dress!

I’m an older sister.  I would totally give my sister the dress.  If I had worn it or not.  If I somehow, in my crazy mind thought my mom would be against it, she would still have the dress.

That’s what sisters do.  They do things for each other.  They go out of their way to make each other happy.  They make sacrifices.  They let the other have their way.  As a sister and a mom, I can’t imagine the mother feeling any other way.

So, I called my sister up, and I told her, if my mom had given me her wedding dress, there wouldn’t be an issue. If she wanted it, it would be hers.

{Emily and Me on my wedding day.} 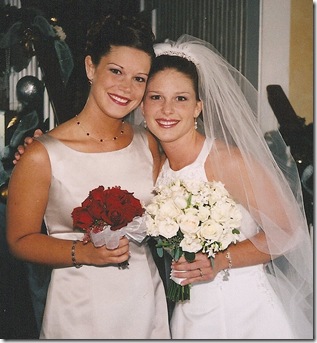 What would you do?  I have a feeling I know the answer.  But, I still want to know your thoughts.

{My sister found my dress for me.  It was the very first one she picked up.  Emily, you know, if you want that dress one day you could totally have it.  Unless, of course, you look better in it than me.}

Hosted by Cecily and Caitlin